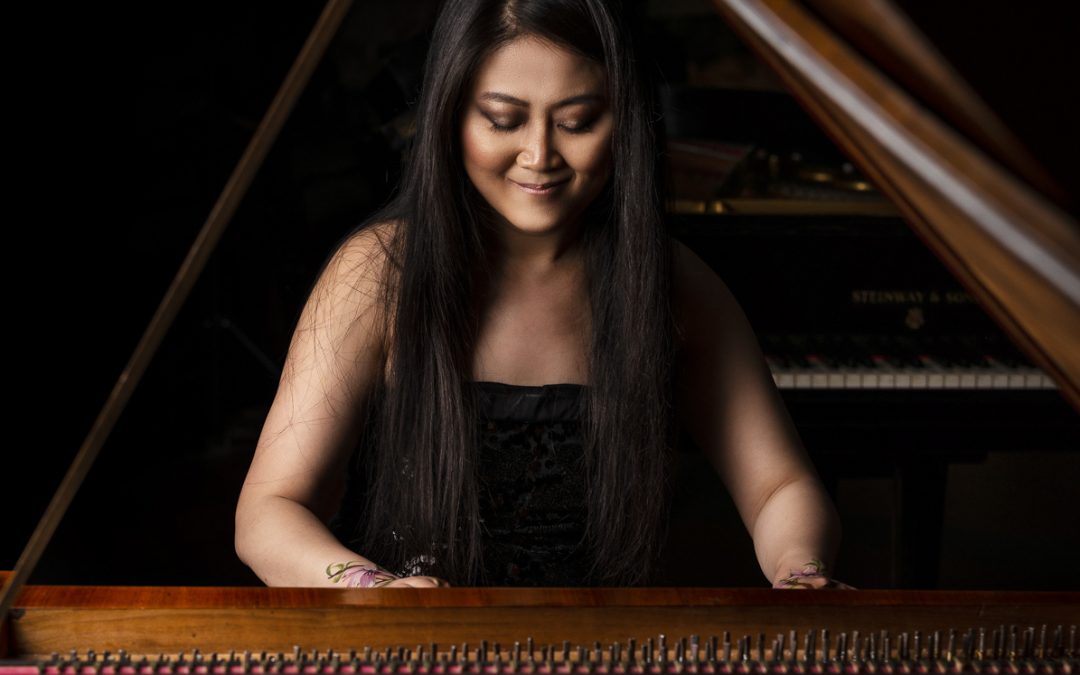 In 2002 I came to Florence to meet musician Stefano Fiuzzi, the man I would marry. I had been in the Medicis’ city only once, when I studied in Siena. On that occasion I would have liked to visit the Cathedral, but my friend – a violinist – was wearing shorts and we were not admitted in. I finally visited it in 2016, when I was invited to perform in that wonderful place!

But let’s go back to my arrival in Florence and my so-much-coveted date. I’d had the opportunity to listen to Maestro Fiuzzi in Salzburg, Austria, and I appreciated his pianistic wisdom, but I knew too little about his activity as the artistic director of the Bartolomeo Cristofori Academy. After giving me a warm welcome, he took me to the Academy’s beautiful premises, in the San Frediano quarter. I was dumb with amazement. As soon as I came into the concert hall’s foyer I saw a collection of elegant and precious instruments.
I had a musical bulimia attack, I wanted to play them all and I still didn’t know what they really represented. What made my heart pound were the fortepianos, original and perfectly restored, but above all capable of reproducing endless ways to make music!

Until then I had thought that pianos fell into two categories – upright and grand – and instantly, in front of so many specimens, I realized I had been a complete ignorant. Why had I never paid attention to the nature and the history of the instrument I loved? How could I believe that in time the piano had always been the instrument I had seen since I was a kid?
I immediately decided I would do anything to fill that gap and now, after so much hard work, I know I did.
The fortepiano taught me to be even more faithful to scores, which are like love letters from the composer to those who read and play them. Thanks to the fortepiano I discovered lost sounds, I found the keys to understand Mozart’s controversial feelings, Schubert’s vibrations and desires. I understood that any instrument, even if made by the same craftsman, can have different and original qualities. I understood why each composer favoured one maker to another: why Haydn loved Shantzs, why Steins and Walters were Mozart’s favourite, why Beethoven and Schubert preferred Grafs, why Chopin played a Pleyel and Liszt an Erard. Because the musician’s personality was as different as the fortepiano’s one.

Today, I think that pianists who never try to play a fortepiano or listen to it cannot understand what this really means. And I believe it’s wonderful that it can still be possible, at our time, to appreciate the sonorities of 200 years ago. From a personal point of view, I can say that thanks to the fortepiano I improved my touch and my ability to listen to myself; in the course of time I’m more and more convinced that there is no duality between piano and fortepiano. I think instead that, as much as it is right to protect biological diversity in nature because each being plays a role in the ecosystem, we should preserve the instruments that represented the history of music.

Between these two “relatives”, so similar and so different at the same time, I feel like a bridge, and I’m proud of it.

We use cookies on our website to give you the most relevant experience by remembering your preferences and repeat visits. By clicking “Accept All”, you consent to the use of ALL the cookies. However, you may visit "Cookie Settings" to provide a controlled consent.
Cookie SettingsAccept All
Manage consent

This website uses cookies to improve your experience while you navigate through the website. Out of these, the cookies that are categorized as necessary are stored on your browser as they are essential for the working of basic functionalities of the website. We also use third-party cookies that help us analyze and understand how you use this website. These cookies will be stored in your browser only with your consent. You also have the option to opt-out of these cookies. But opting out of some of these cookies may affect your browsing experience.
SAVE & ACCEPT